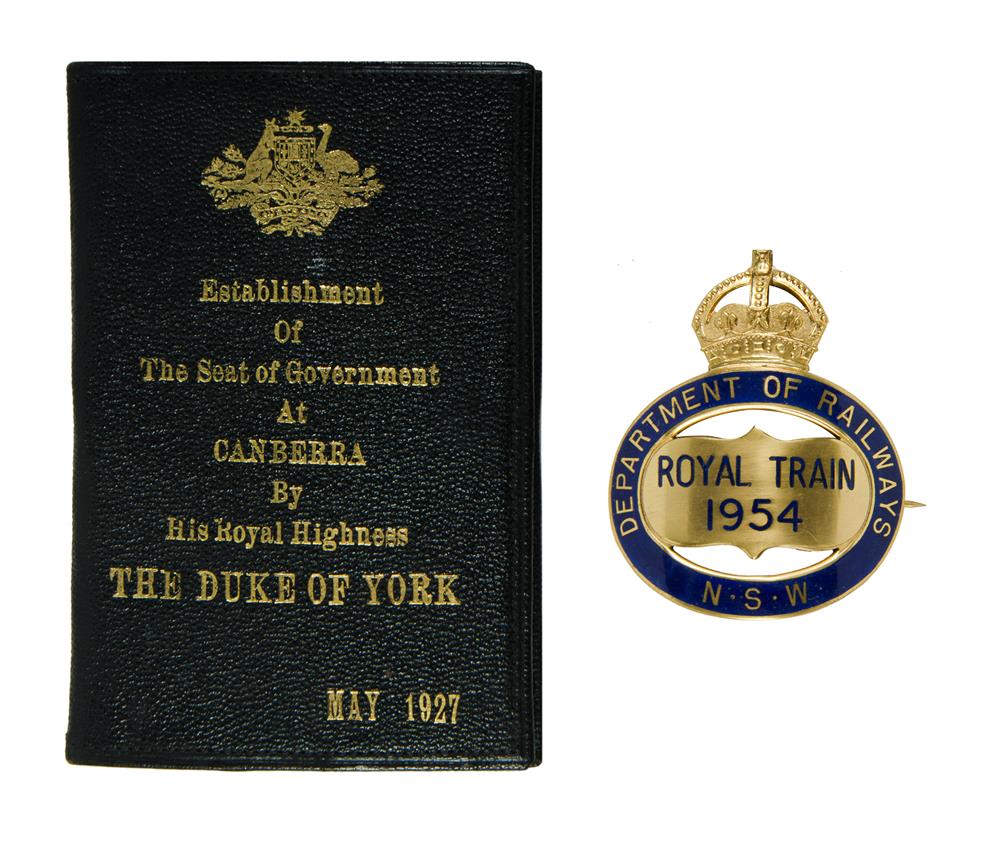 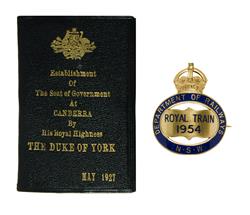 Royal Visit 1927 Railway Ticket (For Mrs T.J. Ley), NSW Railways Royal Train 1954.
Black leather wallet with gold embossing. Establishment Of The Seat of Government At Canberra By His Royal Highness The Duke Of York May1927 beneath The Australian Coat of Arms. The wallet encloses a smaller royal or navy blue leather folder with gold embossing Royal Visit Canberra Ceremony May, 1927 under The Australian Coat of Arms. Inside the folder, on both sides, is a pastedown ticket No 276 Government Railways Of Australia First Class. Issued to Mrs T J Ley Sydney to Canberra & return 8th May, 1927 to 10th May, 1927 signed by Secretary for Railways (Commonwealth). In one pocket of the wallet is a ticket to Admit Mrs T J Ley to the Review Ground and in another pocket, annotated for Mrs T J Ley, an eight page railway timetable & directions for invited guests. Sunday, 8th May, 1927. Monday, 9th May, 1927, Tuesday 10th May, 1927. Wallet is 11.5x7.5cm. Enclosed folder is 7.5x5cm Mrs T.J. Ley's husband Thomas John Ley was MLA for Hurstville for the National Party from 1917, then in 1920 as a progressive for St George. In 1922 he was returned as a Nationalist and was appointed Minister of Justice in Fuller's ministry. He won the Federal seat of Barton in 1925 but was defeated in 1928. Ley then left for England. In London in March 1947 Ley was convicted & sentenced to death for murder. Three days before he was to hang for 'The Chalkpit Murder' his sentence was commuted & he was sent to Broadmoor Criminal Lunatic Asylum. Framed & glazed photograph. Sydney Railway Station also known as 'Redfern' because it was at the Redfern end of town. A very busy scene. Trams with Baldwin steam locos, single horse Hansom cabs & two & four horse buses. The building with the curved roof in the left background is the Exhibition Building in Prince Alfred Park. Photo probably taken from George Street near Quay street looking southeast across present day Railway Square about 1885. Image size 18x36cm. Frame with mount 30x51cm.
Estimate $150-300